We are incredibly excited to announce a brand new mini-game for Olympus - ManaSweeper, that we will be releasing on Saturday 29th May at 3PM EST on both Aether and Atlas!

Manasweeper is a mini-game located in an exclusive mine. Players will teleport to the randomly generated mine as the event begins and the aim is to break as many blocks as you can before they are all gone. Once the mine has been cleared, the player who has broken the most blocks will be given a ManaSweeper Crate! 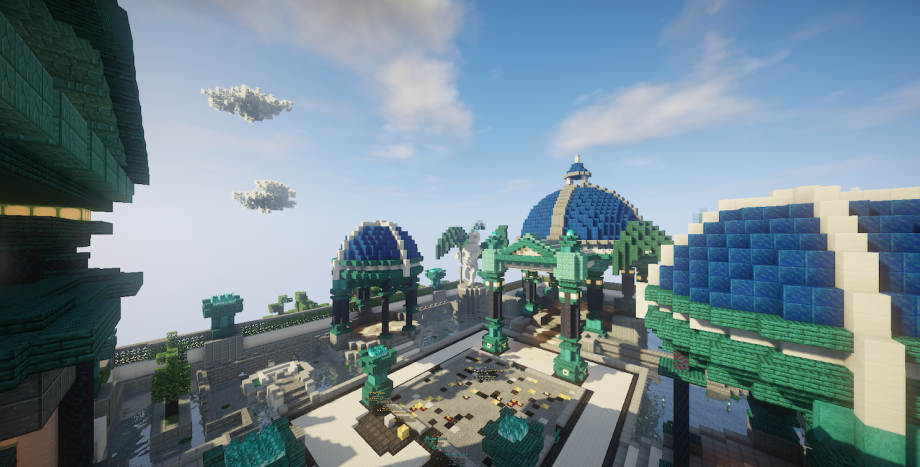 However, we recognise that you are all used to breaking blocks as quickly as you can! Therefore, we have added in some twists to make this game more interesting.

This is not your ordinary mine! Between the common stone and cobblestone blocks is bedrock and effect/reward blocks. These serve to make the game more challenging and rewarding! Along with the reward/effect, you will also receive the actual block that you mined, as normal.

NOTE - Bedrock and the effect/reward blocks, do not need to be broken for the game to finish and do not count towards the blocks you have broken. The game finishes when all the stone and cobblestone blocks are broken

REWARD BLOCKS
These are the blocks you will want to break as they give you an instant reward! Both reward blocks have two possible prizes that are both at 50% chances.

We have scattered bedrock throughout the mine to block your way and slow you down!

The winner of the event will win a ManaSweeper Crate and a Sweeper Win stat point. This crate uses our new crate system and therefore the more times you win this event, the closer you get to winning a legendary reward!

LEGENDARY REWARDS
- Exclusive Join Message - Hide your stash, Gold Digger [IGN] is here!
- Exclusive Speedy Pickaxe - Fortune 10, Efficiency 40, Unbreaking 40
- Colorful Lamb Pet
- Hypetrain - Minecart Mount
We will update this crate every few months with new rewards to keep the prizes interesting! We welcome any suggestions you have for this crate.

The top three winners will also display above the mine until the next event begins!

- /warp manasweeper - to get to the mine - These instructions will be announced as the event begins as well
- Dragonfruit and trench will be blocked in this mine
- You will not be supplied with a pickaxe and you can use whatever pickaxe you want!
- Fly is enabled within the mine
- The mine is randomly generated as the event begins. No mine should ever be the same as the one before.

Saturday 29th May @ 3PM EST
The first event will run this Saturday at 3pm EST on both aether and atlas, and then run everyday afterwards at 3pm est. We hope to see as many of you as possible at this release, we are really excited to see you all playing it!

We have already thoroughly tested this event on our Olympus Dev server and over the next few days we will be doing some further testing on the live server to make sure everything works perfectly for the big release!

YES. IT'S ALIVE. I really can't wait to see the mine get filled with players
Discord: Warlord9120
Prison Mod+

I’ve always been so confused with what you do on Olympus someone pls explain?
ELITE
6 PARKOUR PRESTIGES
MAPPER (5 MAPS): RUBBERDUCKY, GAZ, DRINKINGBIRDTOY, CAÑOCRISTALES, STADIUM
DISCORD: Uduntreal#8466

Uduntreal said:
I’ve always been so confused with what you do on Olympus someone pls explain?
Click to expand...
Slide me a dm on discord ill answer all your questions!

this is definitely gonna be broken

So Trench is banned, but what about Speed, Haste buffs from pickaxe etc? Doesn't having potion debuffs on your pick sort of negate the hazard blocks?

I don’t play Oly but this looks so cool!!
YouTube | Shorts

New event? What shall we call it.. Sweeper.. Let's put Mana in front of it!
Retired Prison Staff
Create a Ticket « • » Report a Player | Staff Member | Bug « • » Appeal your Mute/Ban
JojoStyle#1000 or start a conversation here​

Tasses said:
So Trench is banned, but what about Speed, Haste buffs from pickaxe etc? Doesn't having potion debuffs on your pick sort of negate the hazard blocks?

Also, is fly enabled for all participants or only those who already have access to /fly?
Click to expand...
Whatever is on your pickaxe [excluding trench] will work as normal, the effect blocks are there to combat the advantages from speedier pickaxes.

Fly is enabled for everyone in the mines.
☼ SunsetMagic ☼
● Retired Admin ●​

New event? What shall we call it.. Sweeper.. Let's put Mana in front of it!
Click to expand...
MANA EVERYTHING!
☼ SunsetMagic ☼
● Retired Admin ●​

Redubbed said:
I don’t play Oly but this looks so cool!!
Click to expand...
Come to oly to play this on Saturday
☼ SunsetMagic ☼
● Retired Admin ●​

Dutchy1372 said:
Slide me a dm on discord ill answer all your questions!

HYPE FOR MANASWEEPER
Click to expand...
Dutchy I would but I don’t have discord, what abt forums dms?
ELITE
6 PARKOUR PRESTIGES
MAPPER (5 MAPS): RUBBERDUCKY, GAZ, DRINKINGBIRDTOY, CAÑOCRISTALES, STADIUM
DISCORD: Uduntreal#8466

Also tbh this looks cool and I’ll prob come if I can figure out what to do XD
ELITE
6 PARKOUR PRESTIGES
MAPPER (5 MAPS): RUBBERDUCKY, GAZ, DRINKINGBIRDTOY, CAÑOCRISTALES, STADIUM
DISCORD: Uduntreal#8466
You must log in or register to reply here.
Share: Twitter Reddit WhatsApp Email Link
2013 - 2021 © ManaLabs Inc.
ManaLabs is an Official Minecraft Partner