Quick Guide to Tempfly and The Kilton GUI!

What is Tempfly?
“Tempfly” is pretty self explanatory as to what it is, but if you’re unsure it means you get temporary access to the /tempfly command. Players with the MVP+ donor rank are able to use /fly permanently and everywhere on the server, besides the Hades volcano (PvP mine). Before tempfly was added, non-MVP+ players, whether that be donors who were MVP and below, or players who had no donor rank at all could only fly in the mines.

How can I get it?
In the new season, you are able to purchase 60m of flight for 175 souls (to get souls, you kill mobs and exchange the heads of those mobs in /kilton - the same place you purchase tempfly along with many other perks/loot from). This now isn’t the only way to get access to /tempfly, recently it has been added as a /vote reward (20 minutes)!

However, there is also a way to ‘gift’ or ‘pay’ tempfly to other players, if you are MVP+ and don’t need it, or you’re logging off and don’t want the spare time you have to go to waste and you wish to give it to a friend, or whatever reason! To do this, you do; /tf pay <IGN> to choose the amount time you want to give to the player, do either -s, -m or -h (for seconds, minutes and hours) after choosing between one of those 3 options, you then do the amount of seconds/minutes/hours you want to give to the player, so an example command for this would be:
/tf pay Hallowqueen -m 30

Kilton Menu
First, to reach the Kilton menu do /Kilton, once you do this, you will see this GUI open up.

To exchange mob heads for souls, click the Zombie head (circled in green).
To increase your slayer level, click the spawner (circled in red) or do /slayer.
To open the ‘monster shop’ and purchase perks/titles/loot, click the enderchest (circled in purple).

Once you open the Monster Shop, this menu will pop up and you can choose from the multiple items there what you want to spend your hard earned (or purchased from/ah...) souls on. 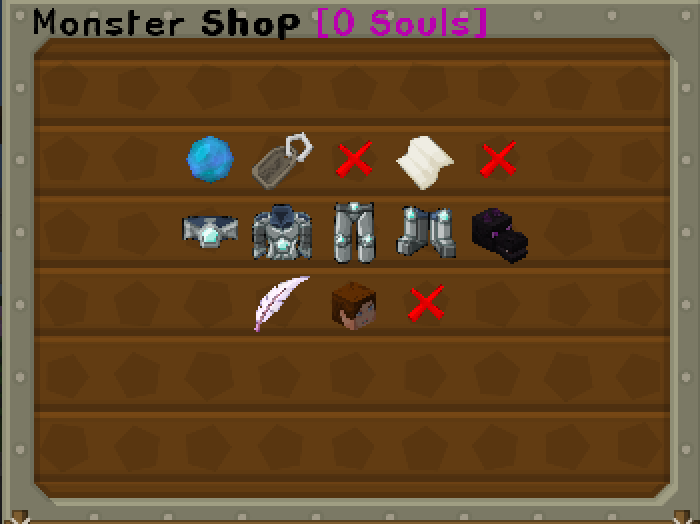 After this menu is open, if you wish to purchase tempfly, simply click the feather! I’ll also include the information about tempfly from the Kilton menu below, but if you wish to see it for yourself, just follow those steps and hover over the feather. 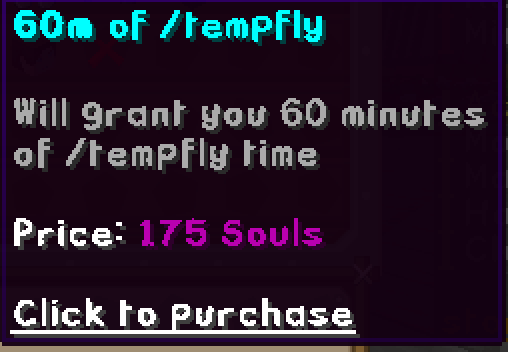 I realise that most of this is self explanatory, and probably common knowledge, but due to the recent update post, I thought I’d create a little guide just explaining the changes/addition(s) in a little more detail! If you’d like to see the “Feature Friday” post that the mention of tempfly now being exchangeable is included in, here is a link to it: https://forums.manacube.com/threads/feature-friday-1.40307/#post-122457

Hopefully this is helpful, if I missed anything or made any mistakes feel free to let me know by commenting them or DM-ing me either here on the forums, or via Discord. Same applies if you’ve got any questions/concerns about the additions.
Last edited by a moderator: Mar 22, 2019
♔ Hallow ♔
Retired SrMod | Local Weeb
♔ Rules * Support * Appeal your Mute/Ban * Report a Bug/Player/Staff * Announcements ♔
Discord: hallowqueen#2377​
You must log in or register to reply here.
Share: Facebook Twitter Reddit Pinterest Tumblr WhatsApp Email Link
2013 - 2020 © ManaLabs Inc. All Rights Reserved.
We are not affiliated with Mojang AB.