Our factions server has a problem: Consistency of season releases
This update intends to fix this, by automating the setup & release of seasons, payouts & more.

Factions will now always be on schedule going forward

This gives less deadline pressure to the dev team, and factions can continue having consistent releases.

There won't be a monthly faction announcement for every season going forward, we will only make announcements when there is updates.
Season release dates can be seen by hovering factions in the realm selector menu 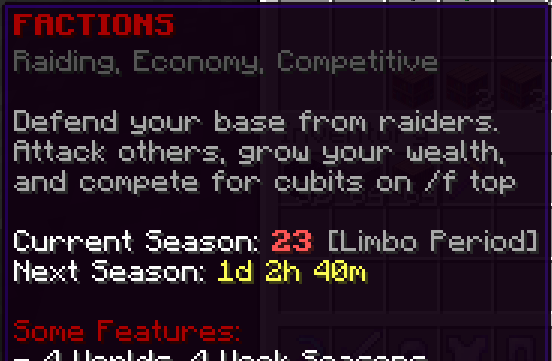 Payouts
Payouts are now automatically handled and announced by the server.
You can also view entire payout history with the /payouts command

Season Queue
Server will turn off on the last day of Limbo. Leading up to the...
Keep Reading
01 Jun
MAY 2022

​
We've thought long and hard on how to approach any kind of parkour reset. After considering multiple possibilities and feedback from the community, we've decided this is the best way to do this.​
​
The following will be reset upon release of Season 2.​
- Mana Balances​
- Mana Pouches​
- Ender Pearls​
- Speed Potions​
- Jump Potions​
- Cooldown Reset Tokens​
- Prestiges​
- Rankups​
World records will also be reset due to abuse in the past, but probably will never reset again after this.​
​
Everything else will remain as is, your vaults, inventories, map completions, stats, etc.​
​
There will be additional "Season" stats & leaderboards for​
- Map completions​
- Dropper completions​
- Adventure map completions​
- EXP (Score has been renamed to EXP)​
These are separate from your All-Time stats.​
​
These seasonal stats are what will be required to rankup & complete prestige...​
Keep Reading
01 May
APRIL 2022

Bloobsi
it feels so good to be playing again
Yesterday at 6:58 PM •••

Acrellux
IF THE MAP SUBMISSION TEAM SEES THIS, I'd like to know when my capybara parkour map is accepted on July 3rd. That's my birthday and it would be epic if it got accepted on my birthday
Yesterday at 8:55 AM •••

Click to claim a special deal
2013 - 2021 © ManaLabs Inc.
ManaLabs is an Official Minecraft Partner
The ManaCube server is not affiliated with or endorsed by Mojang, AB.
Rules Store Updates Staff Support Wiki